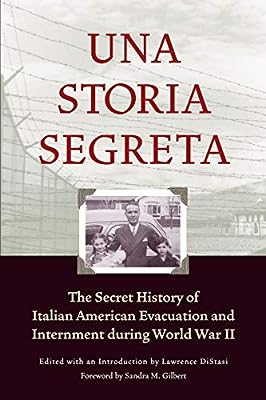 Una Storia Segreta: The Secret History of Italian American Evacuation and Internment during World War II looks at “both the secret shame of those who suffered the wartime restrictions, and the dirty little secret of those who imposed them.” These words, from Lawrence DiStasi’s (Dream Streets: The Big Book of Italian American Culture) introduction to his seminal book on the internment of Italian-Americans during WWII (with a foreword by Sandra M. Gilbert), reveal what Japanese-American detainees and their descendants already know too well about the wartime experience. DiStasi has marshaled a group of potent and moving essays, personal narratives of ancestors and others who were detained, arrested, evacuated or who just disappeared, and some more scholarly examinations of our government’s treatment of the more than half a million Italian immigrants, many of them naturalized U.S. citizens whose lives were turned upside down.

Italian Pride: 101 Reasons to Be Proud You’re Italian Dances With Luigi: A Grandson’s Search for His Italian Roots